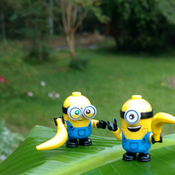 By kendal1931
58 comments
So much is a mystery in the depths of our oceans. There is much undiscovered and stories passed down through generations, they had to have come from someone seeing something unknown...
"Under the Sea" shows the beautiful and diverse life in the waters, as well as the amazing way our planet forms mountains peaking through the surface to become our islands. Rays dance along the bottom of the ocean floor where crabs and lobsters scurry along. Sharks are on the hunt for their next meal, and the fish school together or hide in the seaweed in their efforts to survive.
On the island, a lone Pirate finds himself taking a pause from fishing to grab a snail on the shore. He wants it's shell.  But as our Pirate friend is busy above the surface, the extra fun is the mystery hiding below that the Pirate has no clue is residing.
For a fun surprise, the bottom half of the mountain opens to reveal a gate to the next mystery. Swimming through a crack in the mountain, a Merman pops out on a mission. Turn around the set to access a Mermaid castle carved inside the mountain undersea.
The Mermaid home is filled with sparkling golden objects found and collected by the merfolk, from golden cups, instruments, even an anchor on a golden chain! One Merman has just returned with another golden brick he found in a wreckage, he's seen adding it to the treasure chest on the first level.
On the next level, a little shell bed is ready for a tired Mermaid Queen, who is trying to rest while the King of Mermaids is waiting for another Merman to return. The youngest Mermaid is learning about human objects collected on the top level by a wiser Mermaid.
I made this after seeing multiple underwater builds and thinking I really wanted to do some kind of underwater build too! The ocean is such a beautiful mystery to me and I love watching specials about the animals and forces of nature, it's just astounding. But I also have a side that believes in different mysteries of the deep, including Mermaids, and I thought what if they lived hidden away safe where no one would find them inside the islands? I used a challenge to push me to create this idea and have a fun project that my kids can really enjoy. Once I finished, they were really quick deciding who got to play with what figs or creatures in the set and coming up with their own stories. It's awesome!
I think this would be a great set because not only does it have a wow factor from a front perspective, especially for fans of Ocean Life, showing the diverse creatures living together, but it also has a fun playable side with the Mermaids castle carved inside, which is also a fun factor to surprise people with when showing the build off. Kids and adults can both enjoy.