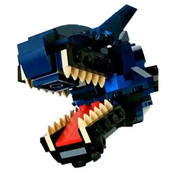 By Torlade525
10 comments
The legendary Blue Wyvern having not been seen in over five years brings the perfect chance for three sneaky thieves known as the Chad brothers looking to steal it's precious treasure at the King's abandoned castle....what could go wrong?
Join them on their attempt to gain riches sought after by people from all over the lands but make haste...the Wyvern could arrive at any time!
Various inspirations helped me create this set, such as the dragon and abandoned castle from "The Hobbit" among other works of media. The King's Abandoned Castle features white Lego bricks of various sizes containing a lonely standing tower, an archway and ruins. The land in front of the castle as well as the tower itself is covered with plants, flowers and moss. The tower also contains a wooden door and a red flag at the top turret. At the side of the tower is a brown crate containing the Wyvern's treasure. There are stone steps leading to the front of the castle too with flat grey slabs atop each one.
The Wyvern is quite functional, with the jaws, neck, ears, wings, claws, and tail capable of moving. The claws are also able to grasp Lego mini-figures.
There are 3 mini-figures with tools including a club and sword (One of the mini-figures also has a sack on his back) along with a medieval style cart containing a grappling hook with a metal chain.
This is my first project here in Lego Ideas and it would be awesome if it reached 10,000 supporters!