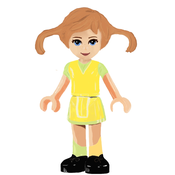 I love the LEGO Creator Animal Sets. Not only are they designed to look as cute and realistic as possible at the same time. They also are moveable and therefore ready for some awesome action.

Yet, I am missing some of the most fascinating animals. The fox is an animal liked by many kids. It is beautiful and wild and it can be seen around with luck. It is also the star of many popular books and films. And nowadays foxes seldom play the evil part in those stories.

So I wanted to create a fox, that would be a toy capable of the action in a kids game as well as look as cute and realistic as possible.

My fox can move his head, his ears, his mouth as well as his legs and tail. Isn't he adorable?

The difficulty of building this fox is medium and the set would consist of approximately 250 pieces.

If you like the idea of having this new Lego Creator Set, please support my project! Thanks!