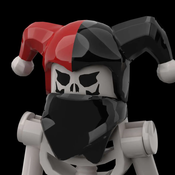 The Idea
Medieval buildings and castles were always my favourite sets. Crusaders, Forestmen and Wolfpack are precious childhood memories of mine.
As there are a great many wizard's towers and houses on LEGO Ideas already, I wanted to make a different type of medieval building. The art of Alchemy was always fascinating to me, as they were in my opinion the true scientists of their time. The endless search for eternal life and the possibility to turn lead into gold drove the alchemist, and this particular one, Bertram, seems to have achieved at least some partial success.
The Project
The home of the alchemist consists of the half-timbered house of the alchemist Bertram and his experimental lightning-catching tower that stands in the middle of the marshlands of the kingdom. On the ground floor of the house, there's the hearth and the dining area. Here, Bertram hosts his guests and customers. Sometimes he even prepares something edible on the fire. Bertram has equipped the former stone watchtower with an apparatus, so it has the ability to capture cosmic energy (we'd say it's lightning, but what do we know?). The machine then conducts the energy directly into his laboratory. From the big barrel, the energy then is led through a complex installation of tubes and can finally be bottled for further usage.
In a second process, with help of the bottled fluid energy, Bertram has managed to prepare seeds in such a way that trees with golden leaves now grow. He has already planted some of them around his house, with astonishing results. It's not real gold, but looks neat anyway. The upper floor, which can be reached by passing through the tower, contains the alchemist's private chambers. There he goes to study, or, in rare occasions, to sleep. In front of the House, the notorious knight Ursina with her squire Alfons have made it all the way through the marshlands to Bertram. They want to have a potion made from the dragon teeth they captured in their last heroic fight.
The Build
With a grand total of 2999 parts I've made it just below the limit of LEGO Ideas. The main baseplate is roughly 32x42 Studs, with a height of 39 bricks to the top of the apparatus.
My model consists of the house of the alchemist, from which the roof and the upper floor can be removed for playing, as well as the stone former watchtower with the laboratory in the basement. The roof of the laboratory with the second golden tree can also be removed. To get a better view of the apparatus, the entire frontside of the tower can be hinged open. The apparatus itself is turnable with the gear located on the backside of the tower. Minifigures
There are 3 minifigures and a few animals included: Alchemist Bertram with his cat Felicitas, and Ursina, the fearless knight on her trusty horse Spot, with her squire, the boy Alfons. Around the house, there's also a rat and 2 crows. I hope you like the idea as much as I do, and I'd really appreciate your support!