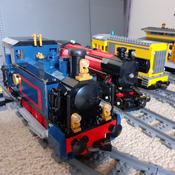 This is a steam locomotive based on the still operative steam loco number 5 Enkhuizen of the SHM in the Netherlands. The Enkhuizen was built in 1929 in the Société de La Meuse in Belgium. The Enkhuizen was operative as an industrial locomotive for many years. Now, it's still operative at the SHM. I built this locomotive in six hours, and it is based on only one sketch (the rest was in my mind).
I built this engine because I love (this type of) steam locomotives. In my opinion, the Enkhuizen has the best color combination I have ever seen. Dark blue, red, black and gold look amazing together.
I think this would make a great set, because all train builders love to see new steam locomotives. They/we loved the Emerald Night set, so I think it's time for the Enkhuizen to become a set. Also, I think this set would be unique, because I haven't seen many power functioned small steam locomotives yet.
If you want to see how this engine runs on the tracks, you can check out my YouTube channel where I uploaded a video about the Enkhuizen.
I appreciate every bit of support.
The BrickTrainBuilder