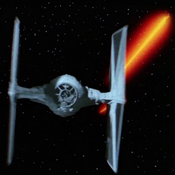 In the ruins of Earth, two major powers rise, the Kozarians and the Avolonians. Both have fleets of space cruisers, as well as ground bases and squadrons of fighters. The two parties clash for power and world domination, and one must fall in order for the other to rise. The Avolonians fight for peace and justice, and the Kozarians fight for a society ruled by military might. The war is on, and before the end, many lives shall be lost.

Just so everyone knows, the clear pieces used in this set are red and orange. The pictures make them look pink, but they are not.

This set is the first of many to come. It is an outpost and the temporary command center of General Hallik. It features four levels. (Level 1 - The armory, speeder launch tube, front and back entrances, and a network of hallways. Level 2 - Lab, base hologram/command table, green military crates, weapons, overhead lights, and a balcony with a repeating rifle in a bi-pod. Level 3 - System power channels, gadgets, and a power tube to the main cannon. Level 4 - Main cannon, communications array, air-conditioning unit, and a sniper nest.) It also features eight Minifigures. (Kozarian security droid, 2 Kozarian security officers, Kozarian scientist, Kozarian pilot, 2 Avolonian black-ops stealth troopers, and General Hallik.) As well as a downed tree, two cannons on bi-pods, a speeder, easily detachable separate levels, 11 modular tool/weapon racks, main computer, science lab station, lots of detail, and 1,250 pieces. I will be publishing more creations soon, and thank you for looking!