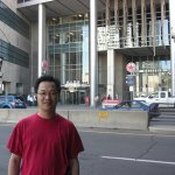 Anyone that has been playing the new Lego Dimensions will find the biggest problem as soon as they start opening their second expansion pack: There's just nowhere to put all those extra game tags!

That's how this idea just struck me! So I start digging into my buckets and start prototyping a stand that can securely hold the Lego Toy Pad and space for all the extra game tags.

After several tries, I have a general idea about the build and decided to finish it in LDD.

The build is using the same color scheme of the Lego Toy Pad, which will situate in the middle of the holder and secured with 2pcs of 4x6 dark grey plate and 2pcs of 2x2 flats. The whole unit size is 48x32.

It has the open slot in the back for the cable outlet as well as a notch in the front displaying the Lego logo.

There are 4 wider slots on each side for larger game tags such as vehicles and other buildable game tags.

The middle slot is mainly for the mini figure game tags. It can hold up to 12 mini figure tags.

All the holder slots are sunken which will allow users to easily move the Toy Pad with all the tags. I think most users do that every time they start the game.

I hope you'll like the design and appreciate your support for this project.