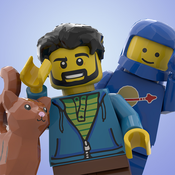 The iconic Tyrrell 6-wheels in LEGO form!
The 6-wheels Tyrrell is one of the most iconic F1 cars from the 70s. Remarkably beautiful and quirky, the Tyrell P34 has always been one of my favorite F1 cars of all time. Even though I was born almost a decade after it was discontinued, and I never watched it racing, my father had photos and a model of it that I used to play with when I was a child. It will always have a special place in my memory.
About the set
The set consists of a very detailed model of the Tyrrell P34 number 3 driven by Jody Scheckter without engine cover. The model has functional wheels, and it's built in the same scale as other Speed Champions models.
Along with the car, the set comes a with a 32x32 diorama inspired by a 70s Nürburgring style racetrack, with great attention to detail.
The diorama includes the track road, 4 figurines (Photographer, Fan, Cameraman and Race Official with a Yellow flag), a set of guardrail blocks, vegetation and fauna.
The car can be placed in the diorama for display or be used apart.
The story behind the Tyrrell P34
During the 70s, the Formula 1 championship went through crazy improvements in engineering and design. Coming from that age, the 6-wheel Tyrrell was built to reduce the drag in the front of the car by having smaller wheels. To maintain the grip, a second pair of wheels was added. Driven by Jody Scheckter and Patrick Depailler, and competing against F1 legends like Nicky Lauda and James Hunt, the Tyrrell P34 was able to get 5 podium finishes and one Grand Prix win. Due to difficulties in the development of the small front tires, this design was eventually abandoned, only competing through two seasons (1976 and 1977).
This set is a must-have for all the F1 fans, and it can be a great addition to the LEGO Speed Champions theme. With your support we can make it a reality and enjoy one of the most interesting F1 cars ever built!
Thank you!