A Constraction Line for Girls 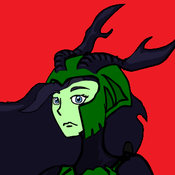 By Bunyip
10 comments
As wonderful as LEGO is, there has always been one area that they've been sadly lacking in: products for girls.

Recent market research by LEGO found that many girls do not respond to the traditional minifigure design, which is a big problem when it comes to designing toys for them. And, let's face it, girls' toys in general tend to be a bit... ordinary. They tend to focus more on looking pretty than offering an immersive, creative play experience.

LEGO has recently launched a new attempt to reach a female audience with its new "Friends" line of products. While the line looks promising, it has attracted some criticism that having just the one line available to girls, as opposed to the dozens of lines aimed at boys, is somewhat restrictive and limiting. To me, the solution is simple: Friends needs to be supplemented by other LEGO lines that provide a wide range of options for girls.

My suggestion is for a story-driven line of buildable dolls or action figures aimed at a female audience.

LEGO has had some success with boys in its “constraction” (construction + action) lines of buildable action figures, such as BIONICLE, Hero Factory, and the recent wave of licensed Superhero sets. These lines are story-driven, providing a wide range interesting and colourful characters for children to follow the adventures of. So far, these lines have been clearly aimed at boys, with predominantly male casts and masculine-looking sets. Even the few female characters tend to be given bulky, masculine action figures virtually indistinguishable from the males.

Like BIONICLE and Hero Factory, the story of this theme focuses on a team of superheroes with elemental powers. This story, however, takes place in the present day, when a group of teenage girls discover that they have inherited special powers after their school is attacked by monsters. It turns out each of them is descended from a mythical creature, including mermaids, dryads, sylphs, and gremlins. Unfortunately, a collision between two universes is causing portals to randomly open around their town, causing all sorts of nasties to get through. Each week, the girls find themselves facing a new creature, and trying to return it to its own world before it destroys the town. There are also human villains, who try to use the monsters- and the girls themselves- for their own sinister purposes.

Action packed shows starring female characters, such as The Powerpuff Girls, Sailor Moon, and My Little Pony: Friendship is Magic have been known to attract large fanbases composed of both genders. The story could be told through a television series or webisodes, possibly supplemented by other material such as books and games. An episodic story format would probably suit this line, with the characters having to confront a new monster or disaster every week, with the occasional “breather episode” (focusing mainly on character interrelationships) thrown in. However, there could also be an overarching story arc every season, which gives the story more complexity for older fans. A story that can balance action and drama with wit, heart and humour is sure to attract a wide audience.

The figurines in this new line would be fully poseable and customisable, allowing for far more flexibility and playability than competing products for girls, which tend to have a rather limited range of articulation. They would be conceptually similar to their “constraction” cousins, but with unique pieces and more feminine, streamlined designs. The characters' faces would be humanlike; molded and painted like the Superhero line. If the pieces were compatible with other LEGO lines, such as Technic or BIONICLE, it would further increase playability. The key thing is to produce sets that are eye-catching and feminine, without being overly sexualised or stereotypical.

A common complaint among BIONICLE and Hero Factory fans is that parts suitable for creating female characters are not available, given the boxy, masculine build of most of the canister sets. Another complaint is the lack of certain colours, such as purple and teal. The existence of similar products aimed at girls would widen the range of parts available to MOCists.

The sets would consist of groups of six canister sets of the heroines, roughly the same size and price as the Hero Factory heroes, two or three waves of which would be released per year (having different armour/ accessories in each wave). There can be an occasional large set featuring a heroine figure with a vehicle or similar large accessory (perhaps three of these released per year). Additionally, LEGO System playsets can be created, featuring the main characters as minifigs or minidolls in various scenes from the story. LEGO would need to do some market research into whether or not young girls would be willing to buy villain and monster constraction sets. If not, those characters could simply be included as a part of the System playsets.

Overall, this is an opportunity for LEGO to do something totally unique, that neither they nor any other toy companies have attempted before. Done right, it has the potential to develop a large fanbase, and set a new standard for girls' toys in general. 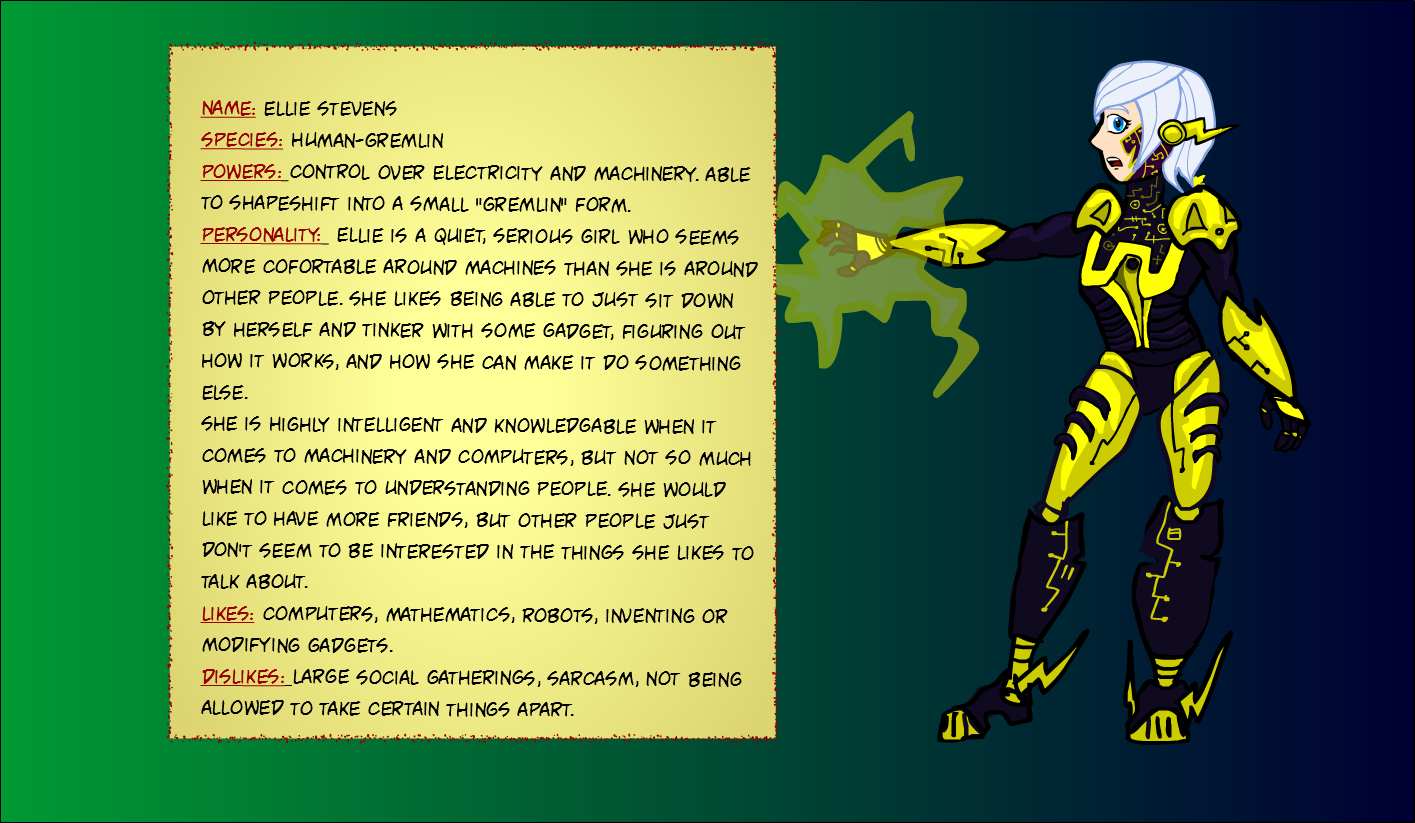 (Please note that I am not much of a MOCist, so I have instead provided some concept art of what the characters might look like in an animated TV show.) 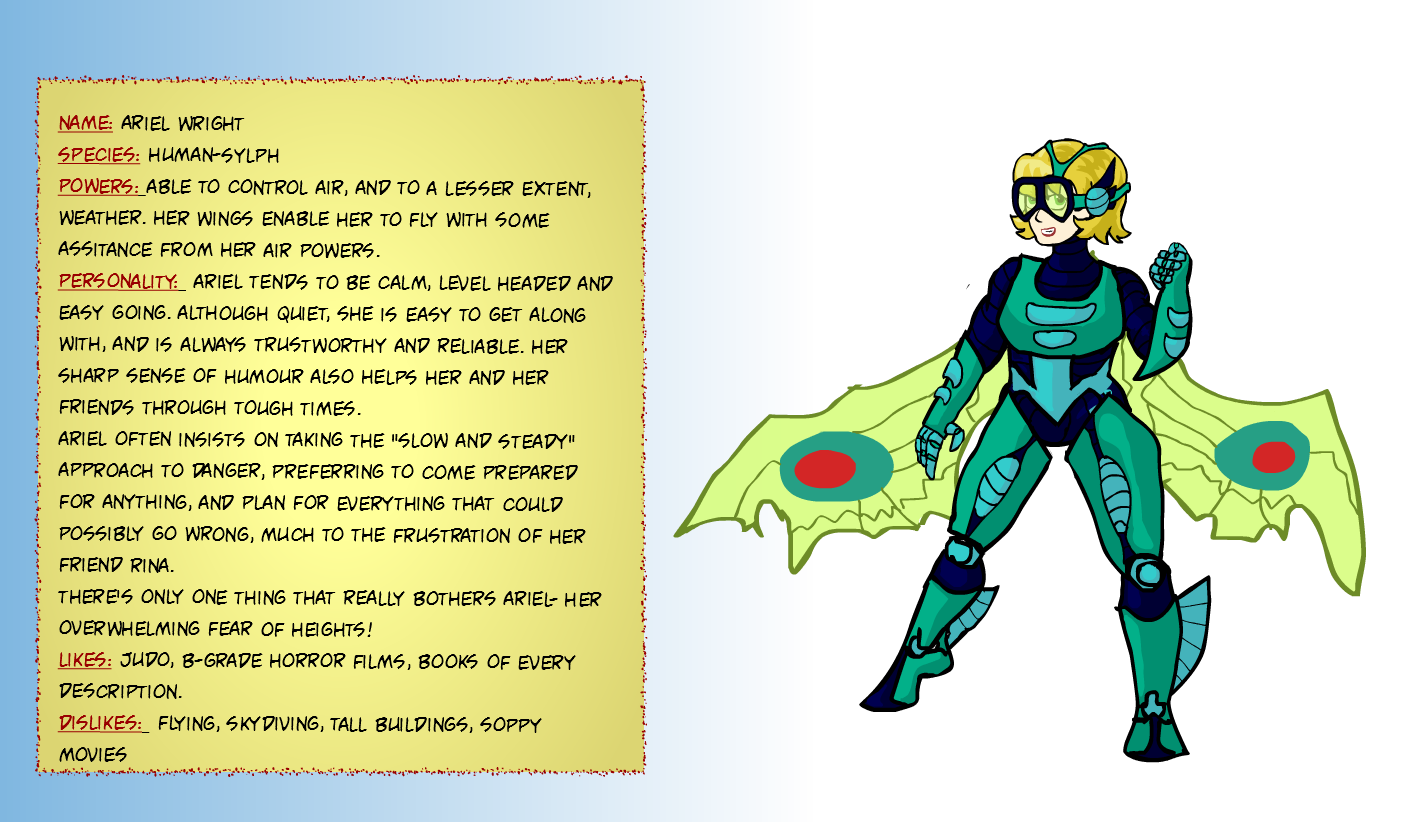 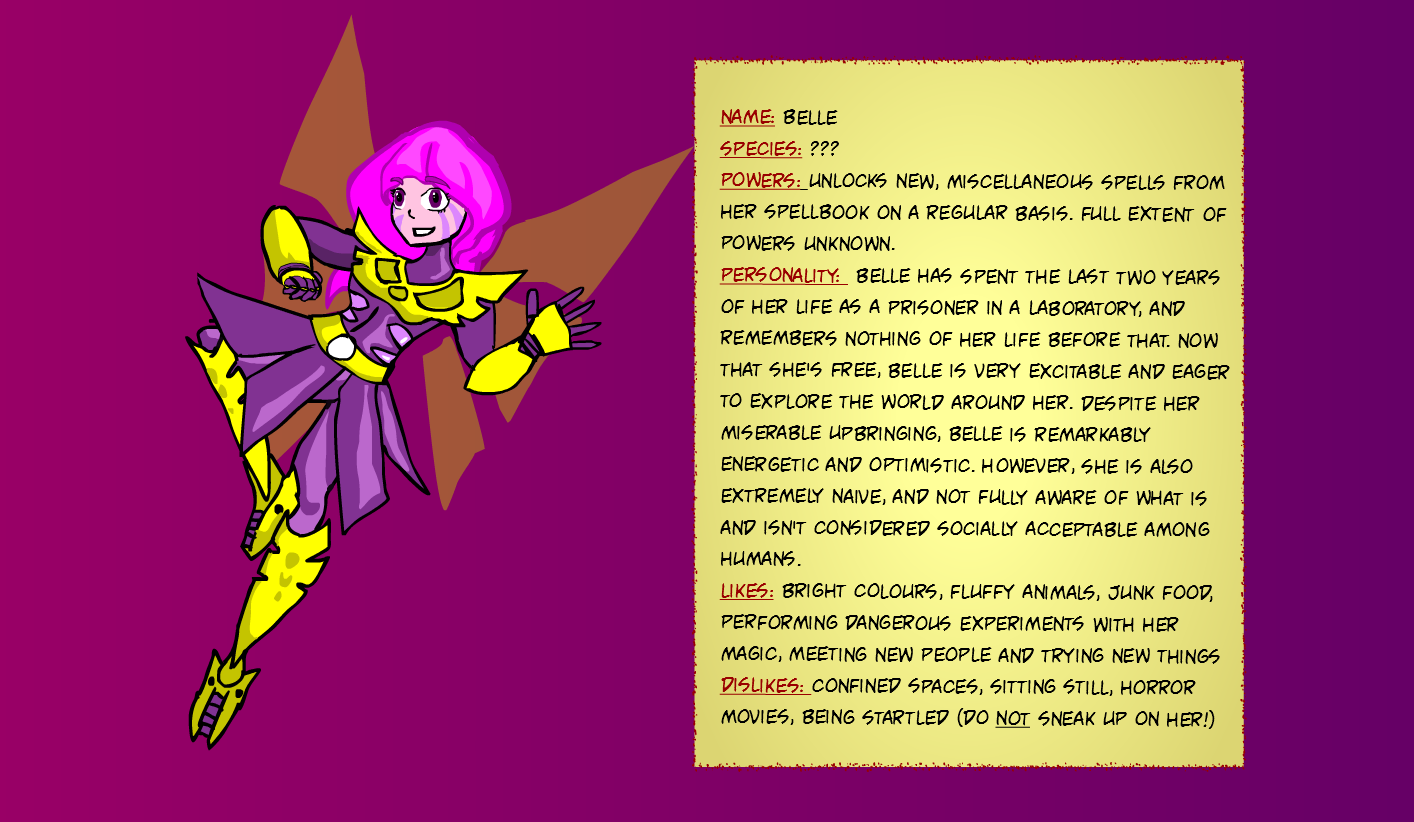 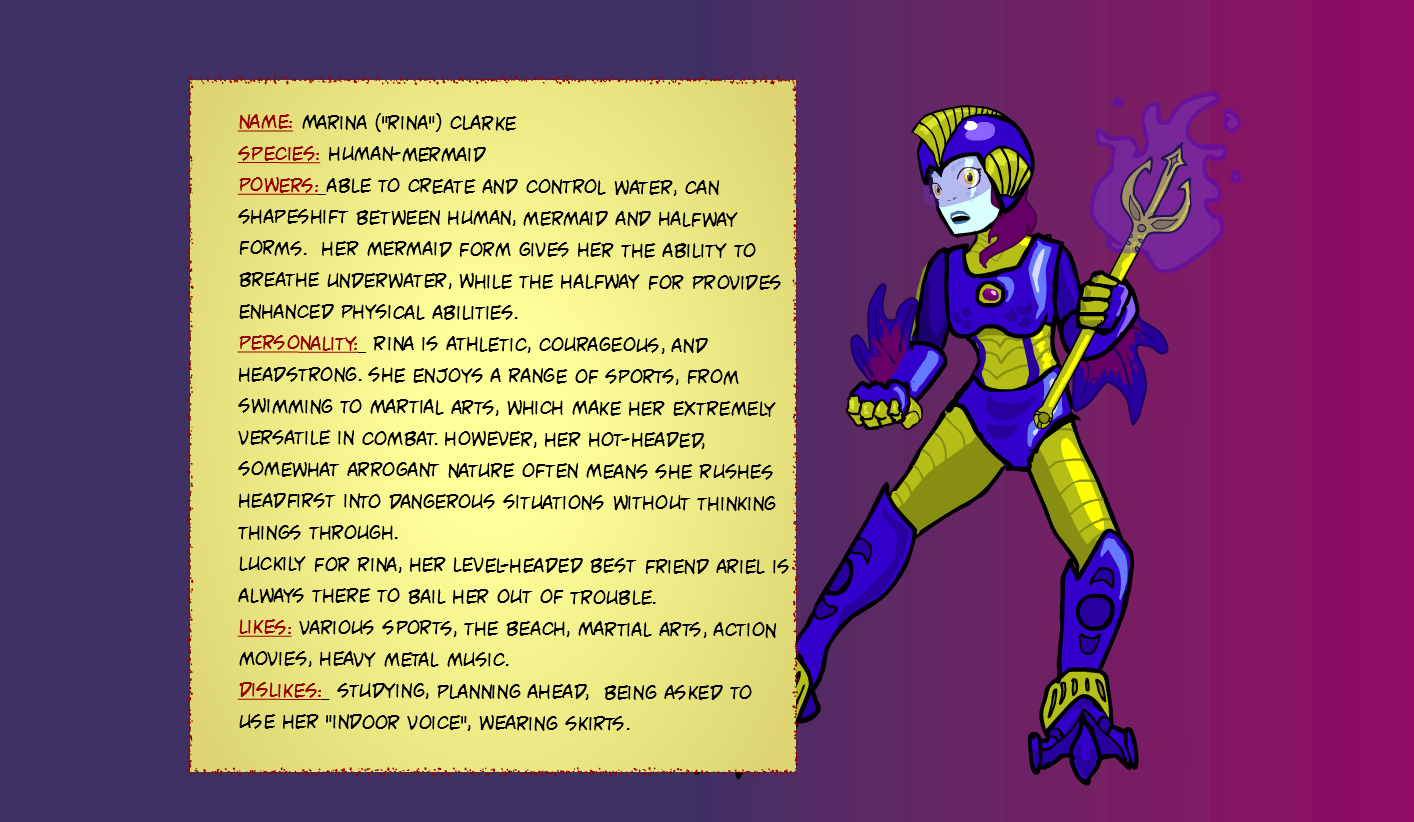 ABOVE: A sample of what some of the "character bios" might look like. These would most likely be published on the theme's website, or in other supplementary story material.