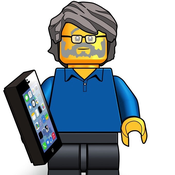 Micropolis is a proposal for a set containing small city building kits scaled similarly to those shown in the LEGO Master Builder Academy Micro Designer Kit (Level 1 Set 2). These kits can be constructed, customized, and collected to build your own tabletop-sized LEGO Micropolis city.

The buildings contained in the basic Micropolis "starter kit" are varied in type and style - big skyscrapers for banks, offices or apartments, government buildings, hospitals, hotels, train terminals, etc. Anything you might find in a city’s business district/downtown area is fair game for a kit in this scale. This proposal contains designs for four large and five small building kits on 4x4 bases. Also in the set is a special harbor area building complex and additional scenic accessories and 4x4 baseplates for customization and expansion. The larger buildings in the basic Micropolis package contain approximately 75-85 pieces each. The smaller buildings have 35-50 pieces each. Most single buildings have 4x4 light gray or white bases, which can be combined to make “blocks” of 2 bases by 2 bases or larger. Building designs proposed for this set are shown in the attached photos.

The buildings come with instructions for building specific designs, but the kits could be easily broken down, mixed together, customized and combined with additional LEGO bricks to make other buildings suggested by the builder’s imagination. Builders could buy multiple sets and use the included parts to build their own custom designs along with the provided designs, constructing their own city skylines with a mix of kit buildings and custom designs. (Of course, LEGO could also release additional buildings as bagged kits.) The designs can easily be combined, modified and extended using any LEGO bricks the builder already has available. (For example, the Airport from the LEGO Master Builder Academy Micro Designer Kit would be a perfect addition to your Micropolis city.

Also included with the Micropolis boxed set is a 32x32 custom baseplate with a preprinted street grid scaled to the buildings. Two possible designs are shown here. One is a basic city grid with 8x8 blocks, 2-stud-wide embossed and printed normal streets and 4-stud wide embossed and printed main streets. The other is similar but features a traffic circle to provide more layout variety. Both types are fully geomorphic and can be matched together in any orientation or combination.