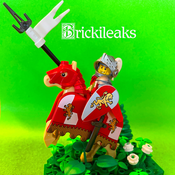 As mentioned in my project “The Poet - Writing Skills“ I‘m currently building some smaller sceneries.

Through my latest idea “The Miner – Medieval Workman” I wanted to show another typical medieval labour. In the Middle Ages mining became more and more important, due to the need of iron and other metals hidden in the mountains. It was a dangerous working place deep down in the dark and cold inner of the mines. But also the railways towards the camps and cities were full of risks. As seen taking the wrong rail could end up in a disaster really fast.

The idea is built on a 12x8 base plate. I first wanted to use a 8x8 base plate, but in this way it looked to cramped and compressed. All the used parts are original Lego bricks. By building it a little higher you could easily make it look like an underground scene with some other motive on top.

I hope you like it. Thank you for your support and your comments! Maybe you take a look at my other projects.