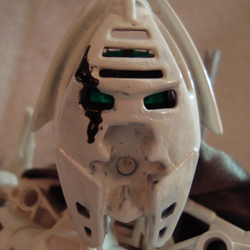 Haotaus
0
General Krootai commands part of the Armies of The Brotherhood of Makuta along with his brother General Taruk. Krootai has the power to likeness of the Kardas Dragon but he can absorb the damage and blast his opponent with pure power or if he was hit with a stick he could wield a stick or fire a barrage of sticks. Krootai is indestructible because what ever he is attacked with he can either use against the same form of attack against his attacker or fire with pure power.
0