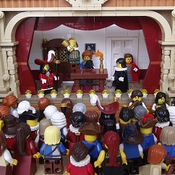 Play out your favorite comedies or tragedies, or create new ones of your own, using the LEGO rebuildable theatre stage !

This lego set is composed of 3 separable modular elements that include the theatre stage, wings, dress circle box and two rooms behind the stage : the playwright's study and the actress's dressing room.

The set include enough pieces to build (using the same parts) several stage sets to represent various backgrounds : a front door, a balcony, a living room, a dinner room, a bedroom, a science room, a throne room, a sepulchre, and even an other theatre stage in the main theatre stage !

We suggest the set include at least 5 Minifigs. A selection of extra Minifig parts could also be included so the actors can be outfitted for different roles, making them more suited to play a variety of comedies or tragedies like Shakespeare or Moliere's most famous plays : Romeo and Juliet, Hamlet, Much Ado About Nothing, Richard III, Dom Juan, Tartuffe, The Misanthrope, The Imaginary Invalid, The Learned Ladies, The Affected Young Ladies... and all other plays you want !

The set can also include several play functions : a trap door on the stage than you can open and close, two drawers to stock extra parts or minifig accessories and four LED lights who works with power functions elements hidden under the stage !

You can use this set as a puppet show, using lego shaft to action minifigs. You can display your own creation on this stage. You can use your own lego parts and minifigs to create extra stage sets and add spectators to the show...

It's a perfect playset, display set, educational set and rebuildable set. This project will make happy all kind of lego fans regardless of age or motivation !

The all project is under 3000 parts and can be reduce depending on the included options and elements.

Thanks for your support !