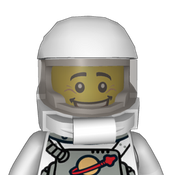 By Carsonlm
26 comments
This cruise ship has four visible floors with seven hundred and eleven pieces. The fourth floor is split into two sections. The second toward the rear of the ship has three pools and the roof on top has a big exhaust with an antenna. The first cut-off section of the ship houses the helicopter pad. The third floor has seven pools and two viewing decks near the back of the boat. The second deck is just above where the ship is steered. The back half of the second deck is the VIP area of the ship. The ship is steered on the front of the ship just below the second floor and stands the entire width of the ship and even further. The first deck has a pool on the nose of the ship, it also has thirty-six orange lifeboats and has viewing decks all along the side of the ship.