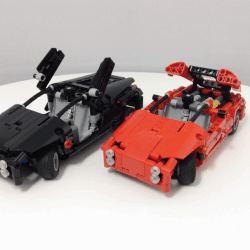 This is a small scale Sci-Fi supercar built with stud-less Technic pieces.
The core of this concept is the possibility of using Technic curved panels to build a really small supercar with functioning steering wheel and a mini V10 piston engine connected to the wheels with a full size differential while having smaller wheels than the differential frame gear.
Overview
The curved Technic panels enable making complex shapes without many holes in the bodywork of the car, and this is the extreme example of how small you can go with it while maintaining some mechanical functionality inside.
The model was initially made with black body and then redesigned to be made with red body elements where possible. Design with coloured pieces was checked for the pieces availability in red colour (whether the pieces are manufactured in red colour). Both colour variants where built physically with Lego bricks.
Detailed interior
It wouldn't be a proper Supercar model without interior details like seats and a steering wheel.

Steering
Apart from the mandatory steering knob on the roof, the steering axle is also connected to a really small steering wheel turned while steering with a knob. It can be used for steering, but the wheel is so small that it slips in the hands - but it works! The knob is placed within the car body outline and doesn't stand out from the roof, but it has space around for fingers to be ergonomically used.

Doors
Like in good Sci-Fi movies, the doors are opening step by step - first unlocking them a little to the sides, then upwards and to the back creating an elegant cyber look of the doors hanging over the roof of the car.

Engine cover
Similarly to the doors, the engine cover slides and tilts towards the back of the Cruiser revealing the engine deck that is built around the heart of the model - the mini V10 piston engine.

V10 - the heart of the Cyber Cruiser
In the engine deck you will find a fully functional Technic V10 piston engine which is connected to the rear axle with a differential regardless of the fact that wheels are even smaller than the differential frame gear. This is achieved by shifting differential one stud up over the axle.

Obviously to achieve this, the engine frame had to be constructed from ground up with multiple tricks in order to fit inside such a small build along the differential and attachment points to the chassis and bodywork, to a point that his Mini V10 takes similar amount of space as Mini V6 built on a small Technic frame. And it works! And it sounds amazing!
Construction
The build of the Cyber Cruiser is fairly modular - there are two main assemblies that are fairly complex, but not really hard to build: the engine with differential assembly and steering assembly, everything else is just small structures that are attached in various interesting and sometimes tricky ways.

The frame or a base of the vehicle is something that could be easily reused to make other supercar models depending on what is possible to be shaped up with Technic Panels or maybe even with System bricks, so this set could be a base for various supercar MOCs.
Instructions available on Rebrickable
Step-by-step instructions for the main model in red colour variant are available for free on Rebrickable:
https://rebrickable.com/mocs/MOC-56258/SaperPL/cyber-cruiser-small-scale-technic-sci-fi-supercar
B-model configuration with rubber band suspension
It is possible to reconfigure the model with some slight part variation to have rubber band suspended axles while maintaining front wheel steering and rear axle connection to the engine with full differential. This is something that could be made into the B-model for this set.
The only trade-off for such suspension configuration is the loss of steering wheel rotation function as the rubber band suspension for the front axle requires additional space that is used by gearing for the steering wheel in the base model.
Potential features that could be added by LEGO in the final kit if Ideas Team accepts it:
- Stickers on the body work
- B-model with rubber band suspension
- Cyber/Sci-Fi styled minifigure fitting the mini size of the model
Share the info about this idea everywhere you can if you want it to become a real set!
If you like this model, look at my other ideas, you will find more interesting builds there.
40
25
days left