The Praxinoscope - A Piece of Motion Picture History 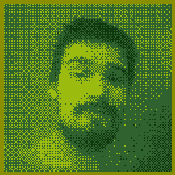 By Mantichore
182 comments
Create your own real life looping Lego animations with the praxinoscope!
By rotating the handle you can play a 12 frame animation on this piece of animation history.
The animations can be switched out, as long as you have 12 separate images or builds.
I tried to mimic a victorian aesthetic by choosing (pearl) gold and reddish brown as the main colors in this build, to give it a classy and vintage look.
As a freelance animator I am very much interested in animation history. The early beginnings of film in the 19th century speaks to my imagination, it seems like it was an age full of inventions where anything was possible. People experimented with images and how to make them move. This resulted in devices like the phenakistiscope, the zoetrope and the praxinoscope. Apparently they also liked difficult names back then!
The praxinoscope is an animation device with a rotating cylinder that has mirrors along its surface. Those mirrors reflect an image to the viewer. Due to the optical illustion called 'the persistence of vision', we see a rapid succession of images as one fluid motion. This is also why we can see movies, which are typically played at 24 frames per second, as one continuous moving motion. In fact, even 12 frames per second is already enough for a fluid motion!
For some reason I couldn't get the idea of making a Lego version of this out of my head, so I started working on some prototypes. It took me a few versions to get to a decently working prototype. Switching back and forth between building with actual bricks and digital bricks in studio 2.0 helped me to get both the technical and the visual side to where I wanted it.