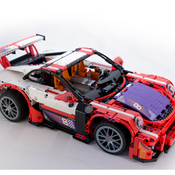 Before I detail my new project, let’s talk about the original model and its designer.

Ludovic Lazareth is a French talented designer. His company (“Lazareth”) is based in Annecy, a beautiful little town located in the French Alps.

One of his last creation is called LM 847 … If I had to chose just two words to describe Ludovic Lazareth’s LM 847, I would probably say “Beautiful Beast”. LM 847 is indeed a motorcycle (yes it is !) with four independent wheels and powered by the 4.7-liter, 32-valve V8 Maserati engine !! This amazing engine unleaches no less than 470 horsepower … that’s probably the reason why Ludovic Lazareth made the choice to transplant two huge tires on the back of his LM 847. Each rear wheel is connected to the Maserati engine and is suspended independently.

Thanks to this complex system, when one wheel moves up, the other one moves down, and this allows the bike to lean …

The same two tires are found at the front end but this time the system is more complex. Indeed, as for the rear part, the two wheels have to move independently and must also include the steering system !!

Between the front and rear wheels, the monstrous engine, a wide handlebar and a tail section sampled from a Ducati Panigale …

This “bike” is just amazing and I decided to build a LEGO version about three months ago !

Understanding how the front and rear suspensions worked and building this set with features as close as possible to the real LM 847 was a big challenge !

I also built a bike lift tailored to the specific features of the LM 847. Two little wheels can move forward and contact the rear wheels in order to stabilize the bike. An M-motor can be connected to the bike lift and allows to see the V8 engine driving the wheels.

I really hope you will enjoy and support my last project ! waiting for your comments !! ;) ;)