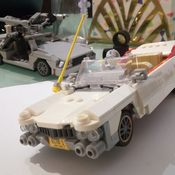 This build is inspired by a Canadian animated series "Atomic Betty" released in 2004. This product idea features the iconic starcruiser with three main characters; Betty, Sparky and X-5. The build has about 420 pieces. I took around a month to build this starcruiser.