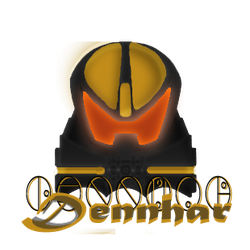 Let's combine a little bit of bionicle-ish Gear Function and some mech-like ideas with Lego Sustem. Add some extra details with gears, brown, gold and tan pieces, and you'll get a Steampunk Giant!

This friend is Called ClockWork (or as it's code-name, C10CK W0RK) and is ready to interact with both Clauss Watch (the one with the googles and the helemt) and James Brown (the scared one) and his kind of "little brother" , W4-ch (the little bot there )

The project presents a simple idea: Two brothers, a mech, a clock (just for fun) and a big Steampunk Mech. Because of this, one can create it's own story with them, as there's no "actual" story.

As said, it comes with two minifigs. The Mech is quite articulated: Free knee, elbow, wrist,shoulder and foot joint. The fingers (4 on the right hand, 3 on the left) are also articulated and, obviously,the head. Also the gear funtcion ads some playability and it'd be interesting for children (thought building the set might be kinda difficult for them) as the gears that are put will rotate all at the same time.