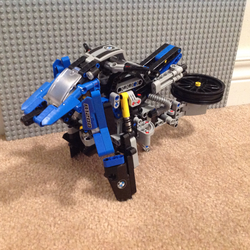 This is a Hybrid(old-new) LEGO model of  a iconic F1. It has many features include

Why I built it is beacause I have a passion for cars and F1. My first F1 I built was slightly smaller and had no functions but drive so I decided to make another F1 instead this would be better and I felt it was like a 5 year anniversary since I built my first LEGO F1 race car so I would probably make one for the 5 year anniversary. Why I think this should be a LEGO set is because I honestly miss the F1 cars in a LEGO version. The only ones they had was the technic ones so I decided to mix it coming with a couple of technic beams and Creator style lining. I'd love this to be a Lego set!