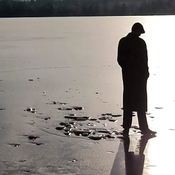 This is a micro scale model with working rear propellers. This ship ,though it is dark grey on the outside is constructed of mostly yellow on the interior. The gear workings are pretty simple being only a gear box and a row of gears. The crank for working the propellers is hidden under a hatch in the middle of the ship. There is a stand and it includes a minifigure of  Captain Williams.