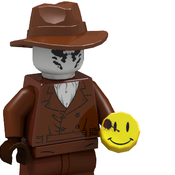 Observing the new lego releases based on the lego ideas, I realize that Lego really loves simple and nice projects.

A couple of weeks ago I was looking for a new project to work on LDD because I was on vacation, so I started to think what to do... should be something new, never made by Lego or its fans.

By that time a watched The League of Extraordinary Gentlemen (again) with my friend, just because she told me that she never watched it before and I really love this movie, mainly because Captain Nemo's mechanical projects.

So I thought it would be nice to have Captain Nemo's ideas made by lego bricks.

This sentence gave me the mainly idea of this project: "The League of Extraordinary Gentlemen - Nemo's Automobile"

Hope you guys enjoy it as much as I do. Thanks for supporting this idea

PS: Special thanks for Mayara Gomes, who helped me on the pictures Design.