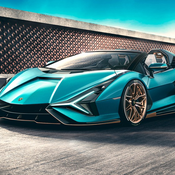 By Jasonz25
9 comments
Have you ever tried to build a functioning LEGO combat robot known as Battlebots? You probably tried but did not get the end result you were hoping for. So I did this and got a pretty good end result so I thought I would share this idea to the community. So this is my version of some of the bots from the 2020 season including Hypershock, Saw Blaze, End Game, Perfect Phoenix, Captain Shrederator, Lock Jaw. Since it is made out of LEGO you can tear the opponent in half if you can. So if you like my project and want to have some fun with LEGO Battlebots then why not support my first LEGO ideas project. (Hypershock is the lime green bot, Saw Blaze is the one with the saw, End Game is the one with the blue spinner and orange wedges, Perfect Phoenix is the black bot with the red bar, Captain Shrederator is the one that is a red, white and blue square and Lock Jaw is the blue bot with the green spinner.)