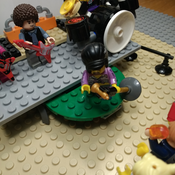 Wouldn't it be something to have your very own rock band in LEGO? With this set, that could become reality. This stage contains eight minifigures; The band (lead singer, drummer, guitarist and basist), audience (two people), the band manager and a security guard. It also contains a backstage, two barriers and a pig balloon (Pink Floyd reference). Help me make this set available by supporting it!

What makes this set so different from all the other rock stage sets, you may ask. Well, this set contains all of the above in a rather little box. If it was sold as an actual set, I'm sure everyone would afford it.

Why did I design this set? The awnser is pretty simple: I wanted a LEGO set based on rock music, and not a specific band. This means that people whom just likes the music can enjoy it, as much as those who likes specific bands since that they can change the minifigures and make the set their favorite band.

A few colors may be inconsistant (there are both beige and yellow minifigure faces), but I hope that this won't hold down the idea of the set, I try to show the forms and the concept rather than what colors it will have.

Because of my economical limitations, I did not have the possibility to build a real-life version of the stage which was as  big as the animated one (made in LDD). Imagine the figures and details in the real-life building, but the stage in the LDD model.

None of the band members are based on real musicians (except for one!)

The security guard is holding a can of SODA  (I used the Buzz Cola can held by Milhouse as fallout boy in the second 'The Simpsons' minifigure series).