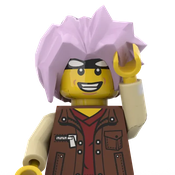 By Aaronelpis
27 comments
Four friends set out on an adventure of discovery! Terra incognita?
This set was inspired by the term "Terra incognita"
"Terra incognita is a term used in cartography for regions that have not been mapped or documented. The expression is believed to be first seen in Ptolemy's Geography c. 150. The term was reintroduced in the 15th century from the rediscovery of Ptolemy's work during the Age of Discovery." Idea & Themes
"Steampunk is a subgenre of science fiction that incorporates retrofuturistic technology and aesthetics inspired by 19th-century industrial steam-powered machinery."
I wanted to make a steampunk-themed set following the theme of discovery, after some trial and error this is what I have come up with. Please let me know what you think in the comments!
The Car - The Boondock Thanks for reading. If you like the concept I hope you can support the project and help get it to 10,000 votes!