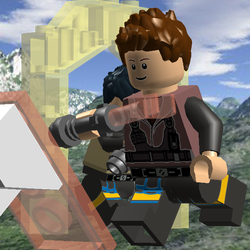 Goborobot
2
The techshifters are a world manipulating team of adventurers setting out to save the galaxy from the Gargratians.

Backstory:
The TechShifters were originally a team dedicated to making all-new machinery and gadgets (although they always dreamed of the stars). They were all primary school friends to start with, and with masses of levels way above their targets each year, they were sent to university early at the age of 14.At the age of 31 when they finally devised how to bring all their famous tools into one, they got to work straight away, the project took them MONTHS to finish, but when they finally did it they set about finding or making a Spaceship. not long after they found a ship, an unknown species (now known as the Gargratians) attacked earth forcing them as quarter trained guardians to protect the planet. ever since they have been searching the galaxy for the Gargratians. They knew what to do.

And the Tweaker as shown on the title cover.