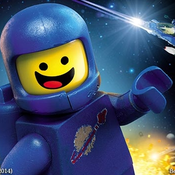 Station 519 was recently established as an exploration outpost on a newly discovered planet on the fringe of the space frontier.   The outpost team’s mission is to familiarize themselves with this strange new world in the hope of establishing a permanent colony and a foothold for future exploration.  Everything was going according to plan until the outpost was hit by a giant storm.  The storm has raged on for weeks damaging the stations solar panels and blocking most of the sun’s rays from hitting the ones that are still functioning.   The station’s Chief Engineer has come up with a plan for harnessing power from a rare source of crystals expected to be found on the planet.   She has been dispatched in the middle of the storm along with the expedition’s Geologist and his robotic companion to locate and bring back these crystals before the outpost’s power fails altogether.

The OX is a powerful all-terrain vehicle capable of negotiating even the most hostile terrain.   The cabin and airborne support craft sit high above the planet surface, safe from harm. Easily accessible by jetpack, the OX’s cabin opens up to allow the driver to enter and exit rapidly.   The OX supports a wide range of sensors and capabilities and transports all of the vital equipment needed by exploration teams.

The Bird is an airborne support craft launched from the back of the OX.  Its flight capabilities enable rapid reconnaissance over a wide area.   The Bird is a nimble, versatile flyer able to easily navigate in tight spaces.  It has wings that can be extended to increase its stability while hovering or when traveling at low speeds.  The Bird includes sophisticated sensors, defensive systems, and maintains a constant data link back to the OX.

Chloe is the expedition's Chief Engineer.  Her amazing ingenuity and love of technology are matched only by her unfailing determination.  With Station 519's solar panels down, she came up with a plan to use photonic emeralds as an alternate power source.  Chloe flies "The Bird" using its sophisticated sensors to help scan for power sources.

Ryan is the expedition's Geologist.  Far from craving a desk job, Ryan is a hands-on type of guy with a love for exploring.  He and his faithful companion MACE are seasoned veterans of many adventures.  Ryan has become familiar with the planet’s terrain and its many hazards.  Ryan is certain this planet has the right environment to yield a source of photonic emeralds and he is confident that he will be able to find them in time.

MACE is Ryan’s robotic companion.  While he is more than capable of traveling on his own, Ryan was happy to add a platform to the OX to allow MACE to ride along in comfort.   Among his many handy capabilities, MACE is equipped with attractor/repulsor beams which allow him to manipulate several hundred kilograms of mass telekinetically.  His tail includes sensor arrays which provide detailed data on his surroundings and alert him to any potential dangers.  MACE can remotely connect to computer data and control systems and is able to issue commands and relay information back to his human team members over large distances.  He is highly intelligent and fiercely loyal to the expedition team.   MACE’s advanced capabilities clearly make him an invaluable resource, but the team views him more as a loyal and trusted friend.   Chloe has recently upgraded a number of MACE’s systems and MACE is eager for an opportunity to try them out.

Rock Beetles are giant insect like beings, easily mistaken for the rock structures known to contain photonic emerald deposits.  Not much is known about them.   Are they friendly or hostile?   That is up to you to decide.