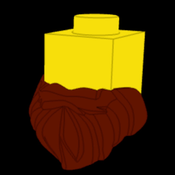 This is one BANGARANG set.

On December 11th 1991, the Steven Spielberg film "Hook" flew into theaters and captured the imaginations of children around the world, young and young at heart...
Over two decades have passed since then, and though many things have changed and we have even lost some of the amazing actors who portrayed these beloved characters, this film remains in the hearts of all those who have seen it. Come support this set saluting the upcoming 25th anniversary of one of the greatest films of the 1990's and celebrating the life and work of Robin Williams.

So what does this set include?
This set depicts the movie's climax and perhaps one of the most iconic elements from the film:
The Crocodile Clock Tower.
Also included is a piece of dock with play elements for Peter and Hook to do battle on.

PROJECT GOAL DEADLINE !
This project will have ONE YEAR from it's initial posting to reach 10,000 supporters, so please share it around.

While you're at it, why not check out these other neat projects?
Walt Disney Presents: The Haunted Mansion by NeverBrick
Jurassic Park Visitor Center by LDiEgo
Up pixar brickproject by Brickproject_7540
Disney's Pinocchio LEGO Marionette with Jiminy Cricket by buggyirk
Red Skull's Flying-Wing Chase by ArtGONG
The Princess Bride by BrickBelt

Until next time, keep sharing and keep on building!
I'm off to Neverland!
-NeverBrick