I Love Lucy - Now in Color! 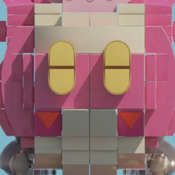 By AndeeWow
59 comments
One of television’s highest-rated and most influential sitcoms of all time makes its LEGO debut with “I Love Lucy—Now in Color!” This set features the iconic New York apartment of Lucy and Ricky Ricardo, built into a classic 1950s cabinet-style television set. It even includes a live studio audience! Most importantly, you can turn the channel knob and switch between original black-and-white, or fully colorized, like later syndications. This set is a perfect display piece for I Love Lucy fans and retro enthusiasts alike.
Several LEGO Ideas sets based on popular television shows have been released lately, and it got me thinking about shows that I personally love. Even though this is a show that originally aired generations before I was even born, I still watched it all the time with my family growing up.  It’s my mom’s favorite television show from when she was little; one that she actually used to help her learn English.
I Love Lucy is an absolutely timeless, innovative classic that’s just as funny as it was 60 years ago—and I wanted to celebrate it with an equally unique set.