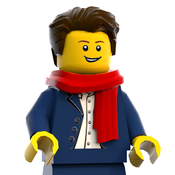 Beware the Flying Dutchman, the most fearsome galleon on the Seven Seas, captained by the evil Davy Jones, lord of the sea; a cursed pirate condemned to sail the oceans forever!

This legendary vessel was considered to be the fastest ship in the Caribbean, and due to its supernatural nature, the Dutchman could sail both on and beneath the sea. With its seaweed-covered torn sails and barnacle encrusted hull, the Flying Dutchman was a remarkable sight to behold by those unfortunate to cross its path.

Number of Pieces Used: 2535 (not including mini-figures)

I built this model from scratch with LDD in approximately one year after I was inspired by a few concepts of this ship online. I had fallen in love with it in the Pirates of the Caribbean film series, and it occurred to me that LEGO had never released it along with the Black Pearl, Queen Anne’s Revenge or the Silent Mary. Determined to build the ship myself, I embarked on an exciting, challenging but rewarding journey to produce a model that the LEGO Pirates of the Caribbean product line deserves. It would make a great set for all the fans out there, who have dreamt of this ship becoming a reality for many years now, and wish to add it to their fleet.