This is the Jedi vessel from the game Star Wars: The Old Republic.

Satele is a character from The Old Republic. Based on her use of the Double-bladed lightsabre her class is likely Jedi Consular. She already exists as a Lego Minifig.

C2-N2 is a support droid that resides on the Corellian Defender.

Qyzen Fess is a Trandoshan and is the companion of Jedi Consular characters (and thus the reason I picked him to go with this Project).


If you need to see this thing in three dimensions, there is also a Youtube video of an earlier build . I give it a spin.

Like the Sith Fury, this ship is built to scale with the statuette fig which is one brick tall (check for a project elaborating on the part ). However, like the Lego Fury, the ship has been modified to use Minifigs. The current design is easily modifiable to the desired scale. With a minimal number of part changes the ship can be customized to its origianal micro/midi scale.

As an homage to the actual scale I propose that a statuette be included in the set, but to make it much more interesting I would suggest that it be cast in trans-blue (translucent blue) so that it can be reminiscent of a Star Wars hologram (see picture ).


If you really like this project please help me get the word out to the Larger SWTOR community.

This can be done by posting in SWTOR forums, SWTOR social pages, Tweeting, or by going to the contact pages of SWTOR and Star Wars podcasts/news sites and leaving a tip. For example:

There is a comment post where you can vote for the next ship you want me to recreate. Just reply to that posting with your selection.
Update: Voting is closed. I will start with the Phantom.

If you hate the Jedi and are 100% Empire, well, you can get this set and just make a target for your Fury to destroy!

Also, if you are a new supporter, Please leave a comment telling me how you found this project. Was it a reference from another project (if so which?), an online blog, just randomly searching Cuusoo?

20130509 The rumors have finally been put to rest and real images of the official Corellian Defender have gotten out into the world: Here they are 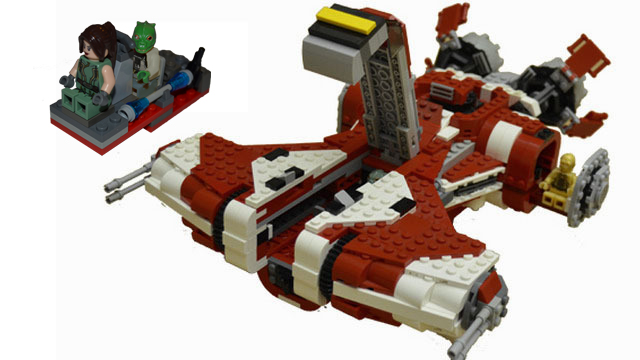 To allow for figures, the central area opens wide. I have displayed the cockpit element external to the build to allow for a better view. The build seats two figures and has storage space for each figure's armaments

For the third figure, the pods open by sliding out. I am continuing to perfect the mechanic of this feature. 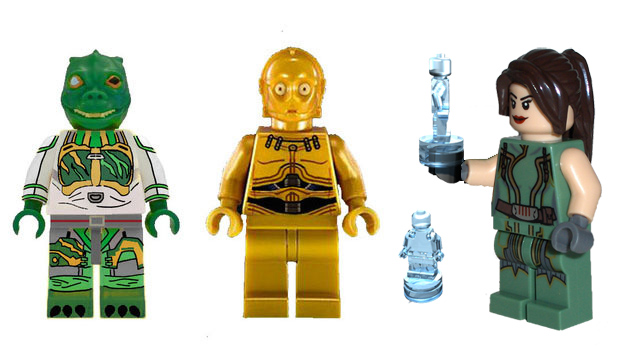 The above picture shows Qyzen Fess and C2-N2, as well as Satele holding a trans blue Statuette. As mentioned before, there is already a Lego produced Satele. I selected Satele based on the idea of using the cinematic characters with roles appropriate for the the ship type and reducing any licensing challenges there might be.

If you are a fan on Trandoshans and Droid be sure to check out Sepsymp's "Trandoshan Wookie Hunt" and his great line of star wars droids.

C2-N2's actual head is not identical to C3-P0s but 3P0's head is as close as it gets with existing parts. At this point I would leave it to Lego to decide if they want to cast a brand new part should this project succeed. 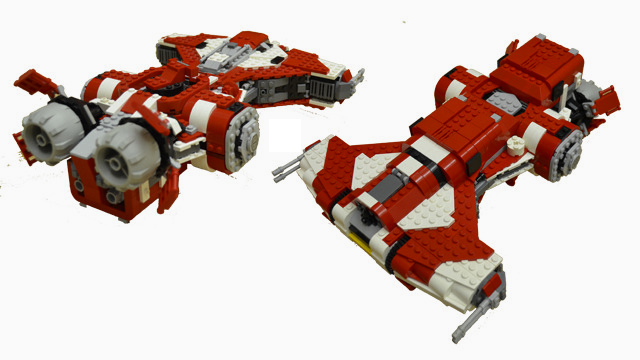 This displays the bottom and side of the Defender. 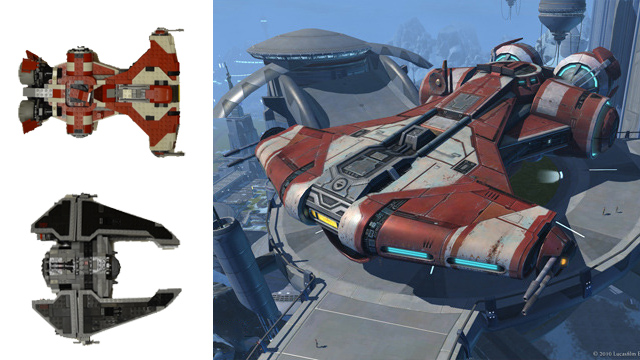 The above picture is for comparison purposes.

On the Left you can see the official Lego Fury set relative to my Corellian Defender. As you can see these two builds are almost the exact same length, just as they are in the game.

On the right, is a depiction of the actual ship. I know the cockpit "canopy" is grey and mine is red. In my original non-fig version I had a more accurate build, but I really like the red canopy on the one I put on. For those wanting the more accurate build it simply requires swapping out a few parts. One of the great things about Lego right!

Special Thanks to the following Blogs for Posting:

These are additional fantastic projects all with at least 200 supporters so you know they are of high quality.

A lot has changed on Cuusoo since I originally posted this project. When I started the project, Lego had not produced a single SWTOR set and now there is a an official Corellian Defender set. Of additional significance is the failed review of the Sandcrawler.

It can be surmised by that fact that Cuusoo is continuing to allow the submission of Star Wars themed projects that Cuusoo is still open to the idea. It is also clear that any Star Wars Cuusoo project that has the "feel" of the current Lego Star Wars line is simply not going to be novel enough to get produced. This includes any project that recreates a Star Wars vessel or scene in a traditional format, UCS versions of the same, or the Star Wars planets series.

Projects like the Lego Lightsabers, Micro Scale Star Wars Scenes, and Chibi Lego builds (if they can get around the figure exclusivity) are the kinds of unique approaches that have a shot.

All that being said, I have no intent of deleting this project. I have many reasons for this tough I will not list them all I will give you a few. One is sentimentality certainly, I am human. Another is that I hope you will check out and support at least one of the many fantastic projects I have listed above. At its core though my philosophy when it comes to Cuusoo is to support the projects I like and let Lego approve or reject them after they reach 10,000. I think it is the silliest thing in the world when people don't support a project they like because they "know" Lego will reject it. So I am certainly not going to apply that philosophy to my own projects.