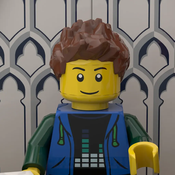 By Brickraptor
19 comments
Hey, Lego fans!
It's time to gear up and get ready for the battle. Go to the weapon rack and get your sword, make a plan at the tactical table. Hop into your carriage and set off for battle, with this awesome set from ancient Rome.
This set contains a Roman general's tent and carriage. The tent contains a tactical map, a weapon rack, a bed, and a trone for the general. In front of the tent, there are two guards, who will do anything for their general. You also get the general's trusty horse and carriage, so you can charge into battle.
I built this set because I was fascinated, with ancient Roman warfare. My favorite detail is the weapon rack, i think that turned out great. I hope you will find it as fascinating as I do.