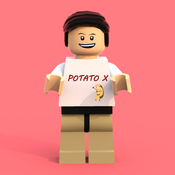 Hello Everybody I'm back with another one of my orginal lego ideas.

So the other day i was thinking what could i build for another one of my orginal lego ideas and i came up with this and called it Lilly's Adventures the story line is that that Its the 15th Centry and a pirate called lilly who works for King Henry VIII  is sent on very special missions for the king to find his most dangrous enimies and defeat them before they become a threat to the king and the royal throne. Lilly has a very special boat that gets her to places very fast so she can defeat the kings enimies before its too late. i all hope you like my made up story line that goes with my lego model.

I used lego digtal desginer the extended version so i could add my own colour to the lego model and Lilly the lego figure, I then used Bluerender a lego rendering software to give my lego model a bit of a polish and so it stands out from the crowd.

​Who Or What Inspired Me ?

Well King Henry VIII actually inspred me as well as the Tutors back in the 15th Centry because back then peoples lives where very diffrent to now the present day beause they never had technogly like us or other stuff and they did there best to cope with what they had even if it seemed there was no light at the end of the tunnel which there was as things got much better for people after that time period.

​How Will I Approch The Set Design If My Lego Idea Gets The Support And Passes The Lego Ideas Review ?

​I'm not sure yet as it might take a long time for my lego idea to reach the 10,000 support milestone as well as the review stage depending on how my lego idea stands out to you guys and if the lego ideas team think it will make a good next lego ideas set, But when it does reach that stage i will turn to the lego ideas team for there advice and see what there opinons would be on this. I also think this would make a great set for younger chiden to play with as it would realate to them and so that the child could play with the story line that i have made up for my lego idea.

Once again thank you very much for you continued support on all my lego ideas.