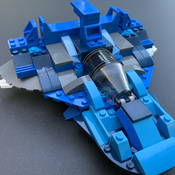 By Syguy
17 comments
This is a dragon head that I built with the cool light green pieces that i have at home.  This build was not planned out at all and I just started and decided to see were it would end up, and this is what it ended up to be!  The design has some cool features to it and has some unique parts that I have gathered up over the years.  I had a lot of trouble with the mouth, but I like how it ended up being.  For instance, the tongue originally looked like it was eating a tomato or something like that!  But now the tongue is what it looks like right now and I also like how the mouth structure came out.
This build took remake after remake as I tried to make it like I wanted to, but never came out as I had hoped, but after I tried and tried to make it look more dragon-like, I finally succeeded(or at least I hope so...)  The neck also proved to be difficult, but after some tries, I settled on a hinge piece that would allow me to add the details that I need.
Overall, this was a really fun build.  It was a challenging one, but worth it.  I enjoyed building it and I hope you enjoy it too.  Thanks!