The Phantom Of The Castle 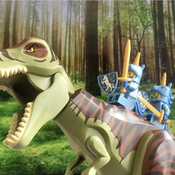 On the outskirts of the city lies an old castle. It is tended by two ancestors of Knight Percival Carter. They visit the castle once in a while. It seems… They are siblings who fight for right and order in their city. Heroes without special strengths. But wit and skills.

A castle with a big secret. Is there just one phantom or… Join Percy and Paula Carters adventures…

This castle comes with a lot of hidden passageways. Uppermost a secret lift (elevator) from the main hall to the secret underground. A cave full of equipment and gadgets.

Kids and adults love castles. They love heroes. And they love to explore things like secret passageways within Lego-builds. So this castle is a nice combination of all of that.

When I was about ten years old, I already made that build. Then it was a villa on a rock. The lift was disguised as a wardrobe. :) About twenty-five years later I build it again. This time the lift is disguised as a chimney. I did a lot of new features. I am sure that kids AND adults would have fun building it. Playing with it will be as much fun because of the various features.

I hope you enjoy them all!

Note: All characters are fictional and are not related to any real person. The names Percival, Percy and Paula Carter have the same Initials as the “Phantom of the castle” (PC).