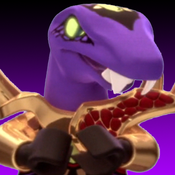 By Joel The Troll
15 comments

"Soren's been missing for years. But the others... You must seek them out! Take this Amulet... And guard it with your life!" - Gabriel

While there have been tons of LEGO Minecraft sets, as awesome as they are, none of them quite match the scale of the real world. And with the success of Minecraft Story Mode, I thought why not build this?

Note that the background used in these pictures is an original screenshot that I took when playing Minecraft myself, not a wallpaper that I nicked off Google Images.

For those who don't know, Minecraft Story Mode is an episodic game that takes elements from Minecraft and puts it into a story.

This is the Amulet of the legendary Order of the Stone, a group of heroes who supposedly set out to defeat the Ender Dragon. In the game, this amulet was given to Jesse (the player) by Gabriel the Warrior in order to reunite the Order and save the world. Dramatic, huh?

You might have figured this out by now, but this is a life-sized recreation of the Amulet from Minecraft Story Mode, which is kind of important in the game. I made this as sturdy and accurate to the game as I could. Good for role-playing!

Thanks for looking, and support if you want LEGO Minecraft Story Mode to become a reality! Also, if you have any suggestions for more of these sets, feel free to let me know in the comments!

By Joel The Troll
15 comments