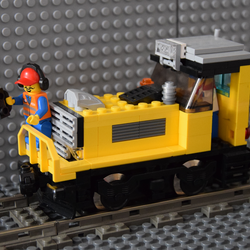 Fire and Rescue Train by Windhoff

This is the swiss fire and rescue train witch is used to responde to emergencys on rail. The original train is made by Windhoff in germany. The swiss railway uses a lot of these trains. They are mainly stationed in towns next to the tunnels. The Train can be divided in two sections. Section one with the device and tanker wagon ist used in the tunnel for fire fighting. Booth wagons have a wather cannon on their top. The device wagon has a crane on the end. Section two with the rescue wagons is used as a shuttle to evacuate the peoples. The train runs with rc-motors.