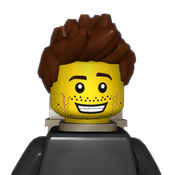 The BOEING 737 is a short to medium range twin-jet narrow-body airliner developed and manufactured by BOEING Commercial Airplanes in the United States.

Originally developed as a shorter, lower-cost twin-engine airliner derived from the 707 and 727, the 737 has developed into a family of ten passenger models with capacities from 85 to 215 passengers. The 737 is Boeing's only narrow-body airliner in production, with the 737 Next-Generation (-700, -800, and -900ER) and the re-engined and redesigned 737 MAX variants currently being built.

As a pilot on the -800 variant, I was really looking forward to 'mix' my passion for Lego with my other love, the aircraft I fly almost everyday.

I took a while to recreate the iconic 737 shape, and althought this model is not 100 percent accurate, it is very close to a 1:350 scale of the original.

I recreated the livery of the company I'm currently flying for, although it can obviously be changed, and I'll follow with some variants should you like this first version.

This model is made with a total of 2331 bricks and its dimension are quite huge but not excessive:

For a grater playability, the model can sustain itself on its own landing gear, which however is not retractable in this first version.

I really hope you will appreciate it.