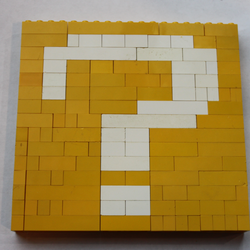 This set consists of 52 bricks (including backboard). It could probably use less if you have the right LEGOs. I used an actual minifigure head as a reference because I wanted it to look as close as I could get it to an actual minifigure head. I wanted to create something simple for people that don't want much when they build LEGOs and they still want to create something awesome (like me) and I created this. This can very easily be built in under half an hour. I think that this is a good decoration if you want a LEGO decoration that doesn't cost much (It's a decoration in my room, and I think it looks good). I think it would cost about $5, so it would be cheap.