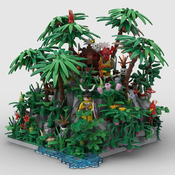 We are visiting the islanders.

The islanders first appeared in the Lego world in the early 1990s. They were the third party alongside the pirates and the Imperial soldiers.
The islanders are led by King Kahuka.
You can see the holy mountain of the islanders.
Inside the rock there is a cave with a source of fresh water, that fresh water flows slowly through the cave and gets out of the mountain through a small tunnel. In this way he supplies the islanders with fresh water, which is essential for their survival. The mountain itself is covered with lush flora, there are flowers in all colors and shapes. Different animals feel at home there. At the highest point of the mountain, between coconut trees, there is a small platform framed by bones. King Kahuka holds his daily dance ritual on this platform to appease the gods. The holy mountain is guarded by warriors of the tribe, specially erected skulls are supposed to keep unwanted visitors away.
In an unnoticed moment, the king's daughter managed to get through the tunnel into the cave inside the mountain. There it shines and sparkles from all directions. On the ground, the glow of the lit torch is reflected in the crystal clear water. The walls and ceiling of the cave are streaked with gold veins. And huge crystals grow in many places. But it's a dangerous place. Poisonous snakes cavort in the cave ...

You can remove the back wall and then open the model. The upper area can also be removed so that you can look inside the cave.