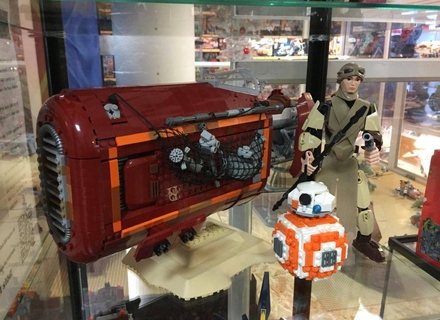 We´re passed 9000 votes and UCS Rey´s speeder is on the home stretch to 10k. The pace of votes coming in has actually picked up a bit lately and the project is now the most supported on LEGO Ideas. A heartfelt thanks to all of you who have supported the speeder´s run over the last six months.

A while back the owner of the local LEGO store asked me if he could display the build there, so that´s where it resides at the moment. And today Rey and her speeder were joined by BB-8, a little model I made as a thank you to those of you supporters who thought he needed to be included as well. :)

Rey ON the speeder 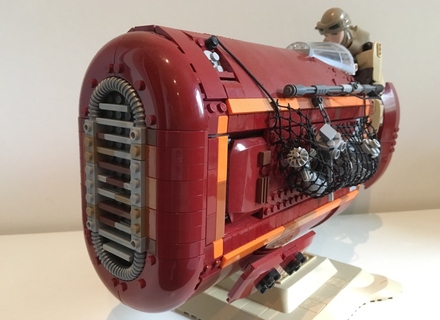 It´s been a while since this project had an update. UCS Rey´s speeder has crossed the halfway mark and is coming up on 3/4. Many, many thanks to all of you supporters out there! It´s great and a little mind-boggling to see that the votes are still coming in.

Over the past months people have been asking me about the scale of the speeder and the possible fit with the buildable Rey figure and in the last update i posted a pic with the two side by side. Last week, I finally took the time to see if Rey could be fitted ON the speeder in a way that looked alright. You can see the result in the photo above. Hope you like it! Onwards to 10000! 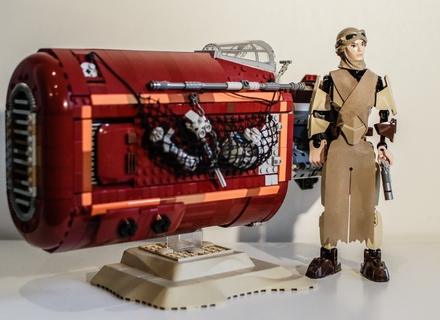 ​A thousand more supporters in six days. What can I say? Not only are a lot of people clicking the button but so many are also taking their time to write encouraging comments and praise the build. It´s a special feeling and I really appreciate the support this project is getting.

Quite a few of the comments have mentioned the buildable Rey figure and wondered how it measures up to my speeder scale-wise. Well, I went ahead and bought it and like some of you suspected the height of the figure seems spot on. It´s kind of bulky though, and the large hands and feet aren´t proportional by human standards so I don´t think it fits ON the speeder but standing next to it, buildable Rey really matches up rather nicely.

I was hoping I would have some studio quality photos to show you of Rey and her speeder together but this will have to do for now. It´s good enough for a size comparison, at least. Keep on supporting!

I was planning on an update when this project hit a thousand supporters but I figured I would I have a few days to prepare. :) Since so many people have asked me if the buildable Rey figure fits the scale of my UCS speeder I wanted to post photos to show how great the two look together. Well, no time for that ´cause the project got to a thousand much faster than I ever imagined. New pics will have to wait until another update since my personal photographer is unavailable the next few days. :)

Thanks to everyone who has supported Rey´s speeder so far and a special thanks to all of you who have taken the time to write me kind comments about the build. It´s been a little overwhelming, actually! I also would like to thank my flickr followers Tyler Sky and Pat Lacroix who encouraged me all the way and to Cool Hippy who came up with the idea to submit the project to LEGO ideas. I didn´t believe in it, but you did, and now look where we are. :)