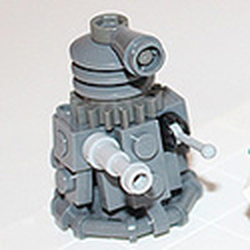 The Unstable Terrain Artillery Transport as seen in Ep III, on Mygeeto, used by the 21st Nova Corps, (the Galactic Marines), led by marshal commander Bacara and Ki-Adi-Mundi.

The set
Parts : ~3000
Dimensions (in stud) : 75x28
Minifigs : commander Bacara, Ki-Adi-Mundi, 7x Galactic Marines
Features :
- the cockpit can be removed
- the turbolaser turret can go up and down
- the 4 laser turrets have 360° rotation + up and down a few degrees
- there are 6 trapdoors for playability, and 2 (at the back) as real entrance with ladders.
- the 16 repulsorlift skis have shock absorbers