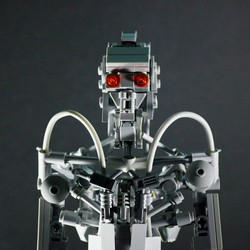 Hurid-327 is a droid who passed by Han Solo, Rey, Finn and BB-8 when they are entering Maz's castle, just appeared for few seconds in the movie of Star Wars Episode 7: The Force Awakens. I believe everyone remember it because this scene is part of the movie trailer, and the design of the droid is so attractive due to the dark red color.

To create Hurid-327 in lego minifigure-scale, I choose some parts from Star Wars droid (battle droid and super battle droid), modified it by using dark gray and dark red parts, try to make it as accurate as in the movie but also simple enough to be buildable especially for kids.

Only 26 pieces, this could be a poly bag, and I believe everyone will love to added it onto the Battle on Takodana set (75139).