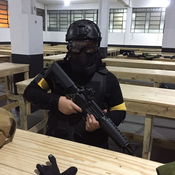 This project consists in a basic looking helicopter, that instead of an tail sided propeller stabilizer, it does have two propellers facing towards to give more fowards thrust. I build this because i think that this could be the future of helicopters reaching better speeds and more stability, but also because it's an inovative lego set idea.

I got inspired on the eurocopter X3 prototype, because than it should be licensed but to avoid this "complication" i just changed something here and there. And i think this could be a nice lego set because it's inovative, but in my opinion it doesn't look that great and that was all by the lack of pieces.