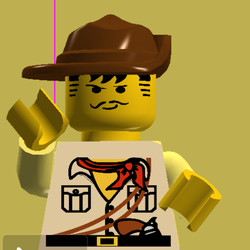 My version of the Return of the Aztec Queen Johnny Thunder Show. I built it as there haven't been any Legoland attractions made into Lego models. The characters included are Johnny Thunder, Tic-Tic, Tayja, The Aztec Queen and 3 Monka Warriors. I think this would make a great Lego model because people who have grown up watching this show may want to have it in their own house made of Lego, so they can play with it any time they want.

The stunt show at Legoland Windsor has always had a large group of fans. Also Johnny Thunder was popular in both the 90's and 2000's. Plus he returned in The Lego Movie play sets, video game and the film itself. So I feel Johnny Thunder should return again, but bigger than ever. Please help this model become reality.