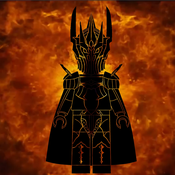 The Silmarillion is Tolkien's writing on the creation and history of Middle Earth leading up to The Hobbit and The Lord of the Rings.

The Valar are Ainur, servents of Iluvatar (there creator), and creators of Middle Earth through Iluvatar. Melkor was the greatest of all the Valar but fell into pride and became "The Enemy" and corrupted many Maiar to his dark will (for example Sauron and the Balrogs). The Maiar are lesser Ainur.

I hope this helps you that have not read this book, to understand.

The wondrous city of Valimar, home to the mighty Valar. The dark lord, Morgoth, upon his capture had been imprisoned here for an age. But now, he seeks pardon, and has been released. But the Valar are unaware, that he still threatens Middle earth...
The City, which is basked in the light of the two trees, Teleprion, and Laurelin, is known as the city of many bells, which ring out clear across the west plain of Valinor. Its great gate, made from gold, stands welcoming to those the Valar bid, and imposing to others.

I will post rendered pictures in an update when their done!

Remember this is not a final product, if LEGO makes it they will make their own version to suit their standards.

Special thanks to commandercody113 for whom I originally started making these "sets". He insisted I post them here and helped to write their descriptions.

Thank you for reading and I hope you liked this project!

If you liked this project and would like to see more of my projects just click one of the links below: