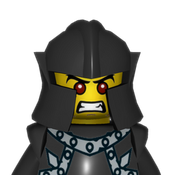 Lego never published the iconic Royal Naboo Starship as an official set, so I built one on my own. It was the most prominent ship in the Phantom Menace and deserves to be released as a Lego set. Although Episode I probably is the worst Star Wars movie, the Nubian Royal Starship is one of the most beautiful spaceships in the entire Star Wars Saga.

My creation is not a playable set, it comes with a display stand and fits the UCS series, being 84 studs long, with a wingspan of 40 studs. It looks great in metallic silver and may even look better in chrome but it would also be nice in light or dark gray.

The model consists of 7 components: a backbone with the cockpit section, 2 wing or plane elements that are attached at an angle, 2 hyperdrive engines, the bottom part and the display stand.