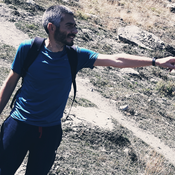 By Nicola Riggio
4 comments
About the build...
My model is a representation of a robot created in an old style way, how people of about half a century ago would have imagined it when thinking of the future.
It is an all-metal robot made with more mechanical parts than electonical ones, operating in a future where men and robots closely interact.
As a boy I loved science fiction romances, so I built it in this way because I think this robot reminds some old Urania stories.
Why will this make for a great LEGO set?
Future is a combination of opportunities and evolution lines. I have imagined an alternative future, as if could have been imagined by people of last century sixties/seventies.
I think it could be a great LEGO set because it highlights some Classic LEGO bricks features not much spread (see, for example, the arm rotation method).
Another important feature is that it could become a little brick set and could be addressed for young LEGO builders which can try building it just looking at the image (just like mini-figures), which is a different approach (visual approach) to building, as you do when creating something with loose parts.
A great LEGO can be also made with few bricks!