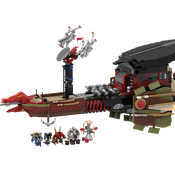 By kimbinsung
104 comments
Thank you for checking out my first Lego project.
The name of the product is ‘New Bounty’. The ‘New Bounty’ is a new version of Ninjago bounty. I really love Ninjago, so I decided to make my own ship.
<Structure>
The front part of ‘New Bounty’ has Dragon head and ninjas’ rooms. In the middle part, it includes sail, cannon, and jail. The back side has engine, cockpit, weapon, and ‘large hook gun’
<Details>
●There is an important but complex system on the back, designed to get the message of what happens in ninjago
●The both side of a ship has a jet engine that can fly in the sky, and there are also weapons to confront the enemy.
●To see the details of the back side specifically, you can separate the roof and wall.
●You can also see moving gears when you lift the floor.
●The sail can be transformed.
● Behind the sail is 6 cannon, and under the sail is jail.
●In ninjas’ room, ninjas can take a rest.
●On the bottom of a ship has a lever which can transform the direction of the engine. When the ship flies, you pull the lever, and the direction of the engine will change. There is also a fixing device that can fasten the engine when you change the direction.
●The room includes TV, game console, and bed. For an enjoyable Situational play I create chess, fight training machines, burning ‘clouse’s magic book’, and ninjas’ riding robots.
(4040 Piece).