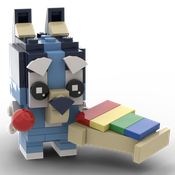 My Bluey BrickHeadz set is based on the award winning children's cartoon series "Bluey" which was created by Joseph Brumm and is produced by Ludo Studios in Brisbane Australia. The show focuses on a family of blue heeler dogs- there's Bluey (6yrs old), her sister Bingo (4yrs), her mum Chilli and her dad Bandit. Bluey is all about family and imagination with some Australian culture and tradition thrown into the mix. It is a show aimed at children which is just as enjoyable for adults and it is produced in Australia. "Bluey" is on the ABC in Australia and BBC in England but is now also on Disney+. It is the most watched children's show in Australia and is poised to take the world by storm through Disney+.
This set includes BrickHeadz style version of Bluey and her family. I love BrickHeadz and I love Bluey and living in rural Queensland, Australia, blue heelers are a part of life. I built Bluey and her dad Bandit for Brickvention 2020 and travelled over 3,000km to Melbourne to display my BrickHeadz MOCs. Bluey was super popular with the kids- they seemed to just automatically hone in on Bluey and her dad from across the room and they all wanted Bluey's little sister Bingo and mum Chilli too. I lost my voice telling all the children that I needed some more orange tiles to finish the rest of the family. A lot of parent's saw my display and then went and tried to find the "Bluey" set in the sales area without success. Some parents wanted to buy Bluey and Bandit from me during the convention.
I have even had some parents contact me through Instagram since Brickvention to let me know their children (and the parents) are now collecting BrickHeadz after seeing my display. I hope that this set of Bluey BrickHeadz will get more people involved in the Lego community.
Since Brickvention 2020, I have re-designed my Bluey and Bandit to be even more accurate to the cartoon and have also built Chilli and Bingo (given the overwhelming requests from the kids at Brickvention). The only "hard to find" piece was the 1x3 medium blue used on Bluey. Ultimately, it would be great to have some grey flecks printed on the dark blue 2x4 tiles for Bandit, as in the cartoon Bluey's Dad has some "distinguished" grey in his hair.
Given the show's focus on family relationships, this set of BrickHeadz had to include Bluey, Bandit, Bingo and Chilli. Bandit and Chilli are in standard BrickHeadz scale while Bluey and Bingo are at the smaller Brickheadz standard scale. The great thing about BrickHeadz is that kids can play with them as larger style figures of their favourite characters and adults can collect them for display. Bluey has fans at both ends of the spectrum, so whether young or old, there is something in this set for everyone.
Most of all I hope the set inspires children to be creative and use their imagination and encourages them to enjoy Lego with their families. "Bluey" is a very Australian show but has worldwide appeal...and face it, everyone in the world seems to love Australia. It would be great to have a set based on an Australian cartoon, with very Aussie characters, that was designed by someone in Australia...a real dinki-di, true blue set from down under.